The very first book in season 4 of Sweet Valley High (the book series) is the first of its kind! A girl who doesn’t lose herself over a guy. What makes it even better is that the guy in question is Sweet Valley’s most hated egomaniac Bruce Patman! You seriously have to see how she puts Bruce in his place – it gives me chills. 😉

Sweet Valley Scale: 4 out of 5 Twins

Quiet and determined Kristin Thompson knows exactly what she wants from life. Ever since she was little, she has had one goal – to become a world-class tennis player. Now all she has to do is win one more tournament and she’ll qualify to turn professional. Then handsome Bruce Patman invites her out and sweeps her off her feet. But there’s not enough room in her life for a boyfriend and professional tennis. Kristin begins to wonder if a romance with Bruce will make her happier than winning the tournament ever could. Will Kristin give up her lifelong dream for the chance to live like a normal teenager?

I know what you’re thinking. Not another book where some dumb chick lets Bruce Patman mess with her and muck things up. The book’s back cover totally makes it seem that way, but it is misleading and for once he has met his match! (Seriously, loud cheers over here.) So anyway, Kristin Thompson is a tennis star. Her entire life is tennis, which takes priority over all else (even school) so she doesn’t have many friends, not because she isn’t likeable or friendly, but because she is never available, and just doesn’t have the time. When she is finally within reach of playing the professional circuit the pressure she has put on herself along with wondering if the grass may be greener on the other side (a normal life) finally gets to her.

Her mother was a famous tennis pro who was on her way to Wimbledon when the plane she was on crashed, killing her. Kristin was only eight years old when it happened. Ever since, tennis is the way she feels she is still connected with her mother and she puts pressure on herself to do what her mother never got the chance to do: win Wimbledon. So she wants to go pro and she has devoted her life to making it happen. Usually I have to trash the ghostwriter’s complete lack of research, but at least they had the schedule of a kid going pro in terms of some kind of competitive sport, correctly. Kristin has no life and now that she is so close to reaching her dream, she is questioning whether it’s all worth it.

Enid Rollins and Elizabeth Wakefield start a big sister program at Sweet Valley High and one of the prospective little sisters, Emily Brown, is obsessed with tennis so Elizabeth approaches Kristin about it. Kristin is hesitant at first, but when Elizabeth explains it is for little girls who have lost their mother, and this little girl, wants to be a tennis star, it just feels right and she agrees. That same afternoon her tennis coach, Dorrie, who is practically family and was her mother’s best friend and teammate when she was still alive, tells Kristin she has an appointment and their practice has been pushed back an hour. For a girl not used to time on her hands, she suddenly has some, and finds herself where else – the school’s tennis courts. Bruce Patman is playing some guy, and he asks Kristin how he did, since everyone knows she is a tennis star. She tells him what he needs to work on (and you know I loved this part) and his game improves when he follows her advice. Then he plays her among the crowd’s insistence and Kristin can tell he is the kind of guy who would be mortified to lose to anyone, much less a girl. For me this would just be icing on the cake, but Kristin lets Bruce win because she feels sorry for him. Let me say that part again – Kristin feels sorry for jackass extraordinaire Bruce Patman! She lets him win not because she likes him, but because she pities him. Sorry, I just LOVE this so much… All right, I’m back.

After that Bruce shows an interest in Kristin, and Kristin is kind of interested back. Unlike other girls who have fallen for Bruce, despite what the book’s summary would have you believe, she never falls for Bruce. But because she has no life, he is the only boy showing an interest in her and Kristin is starting to wonder what life would be like as a normal teenage girl and normal teenage girls date. But make no mistake that she thinks Bruce is full of himself, cocky, shallow, vain and so many other accurate adjectives that the girls crushing on him never seem to get. I have to say, I like this Kristin Thompson.

Going out on a few dates with Bruce is taking away some of her sleep time – sure, but it is her, “Do I really want to do this anymore?” and “Will people still love me if I fail?” that actually affect her performance. The first round of qualifying matches she does terribly in. But because she is so good, she still wins. (Just instead of killing her competition, it was a struggle.) Bruce keeps calling her, and her father is being kind of a hard ass about her schedule and how much sleep she is getting, so this annoys him. You can tell his heart is in the right place and he just wants to support her, but he kind of loses sight of that.

Bruce invites Kristin to see his brand new stereo system, and Kristin turns him down. She is busy and tells him that next time he should give her more notice and hangs up on him. I don’t think you understand how much I love this girl right now. Later, Bruce invites her to his family’s annual blowout at the country club and she really wants to go, but she knows it is a bad idea. It’s the night before her final qualifying round, when extra sleep is particularly important, but she still says yes. I don’t think it’s even about the dumb party. It’s just plain self sabotage. She keeps getting defensive with her father whenever he mentions sleep or how important, this or that is, which just goes back to her curiosity with “normal” and fear of what people will think if she can’t measure up.

Even though Kristin is going to Bruce’s party, she is still determined to leave early and get enough sleep. But as soon as she gets there, she realizes what a mistake she made and just wants to leave. For one thing everyone is in formal wear, and she is in a simple sundress. And even though she is supposed to be Bruce’s date, he ends up ignoring her almost the entire time. He spends most of his time with his “former” on-again off-again fling, Amy Sutton. Kristin finally decides to leave, and she doesn’t bother to try to find Bruce to say goodbye (he is off dancing with everyone else besides her). She realizes that if this is what a normal teenager’s life is like, she isn’t missing out on much. Attagirl! 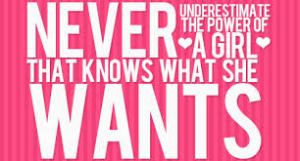 Even so, however, Kristin has trouble falling asleep, and loses the match the next day. She’ll be on Nick Wylie’s pro team as an alternate and can try again next year. Kristin tells her coach that she feels like a failure, and her coach tells her that her mother was going to quit tennis after Wimbledon in order to have a normal life and spend more time with Kristin. Her little sister, Emily Brown, tried out for tennis camp and was rejected and Emily is afraid Kristin won’t like her anymore. Kristin tells Emily that she only wants what Emily wants, and doesn’t love her any less. And she’ll help Emily so next time she’ll get in, because if she wants it enough, she won’t give up. Get ready for it – light bulb! Kristin feels terrible for losing, but after her talk with Emily everything clicks and she realizes her father and coach were only supporting what she wanted – it was never for or about them, but for her.

The next day at school Bruce is all pissy with her for leaving his party without saying something and she tells him off. It was wonderful – she wasn’t hysterical or angry, but calm, cool and like, “Please get over yourself, I am so much better than you.” I mean Bruce has been screamed at before or totally gotten away with his crap, but no one has gone all superior on his ass before – ever. Okay, now I kind of want to marry Kristin.

That night, Nick Wylie calls and one of the players on his team is out for at least a few months with a serious injury. He wants to know if Kristin will join the team since she is the first alternate. He tells her that he was surprised she lost the last match and was wondering if it was a fluke. She could become a permanent member of the team if she shows him what she’s really made of. Her first tournament is in two days.

She shows up, more ready and “in the game” than she has ever been before. Elizabeth finds out she is on the team and playing in the tournament and she gets a big group together to go out and support Kristin. Nick tells Kristin not to be too upset when she loses because her opponent is the best of the best and undefeated, and Kristin kills it. Everyone is surprised and happy! Bruce flirts with Kristin after, wanting to date someone with her “celebrity” status and she pays him no mind at all. All right, it’s official I am so leaving my husband for this girl. 😛

Can you believe it? Bruce Patman finally gets his, and a girl in Sweet Valley finally doesn’t lose her head or go to pieces because some guy pays attention to her, or snubs her. Kristin’s only fault was being too nice at times, because she has no problems in the judgment department. She pitied Bruce Patman from the start… Sigh – I am content. You go girl! 😉