This book was something else. Besides the usual Sweet Valley nonsense it actually contained the most moronic storyline to date (it was Elizabeth’s storyline in the book, not the main storyline). I mean, OMG, you have to read this for yourself! 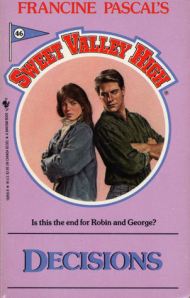 Robin Wilson is having a spectacular year so far. She is in love with George Warren, doing very well in school and she’s almost sure to win the upcoming diving championship. But then her rich aunt makes an offer that’s incredible – and it just may ruin Robin’s happiness! Aunt Fiona will pay for Robin’s college education if she attends the same school her aunt and grandmother attended in New York. If Robin accepts, she’ll have to leave George, all of her friends, and her diving behind, but without her aunt’s help, Robin may not be able to afford college at all. Robin feels as if she’s being pulled in two different directions. How can she do what is right for her without hurting the people she cares about most?

Okay, so during this entire book I kept thinking, “If Robin Wilson is supposed to be so smart that she gets early admission into Sarah Lawrence, why is she being so stupid?” The answer of course is that she is a girl in a Sweet Valley world. So, Robin Wilson has been accepted for early admission to Sarah Lawrence. She is freaking out not because she doesn’t want to go, but because she isn’t sure if she wants to go. She is afraid that if she wants to stay in Sweet Valley she will have to contend with her mother (who is getting a new kitchen because her aunt is so thrilled about Robin attending Sarah Lawrence) and her aunt, who is a very domineering and controlling person, and if she wants to go to Sarah Lawrence her relationship with George will be finished! Are you fricking kidding me?

Robin is acting like a crazy person, and she just doesn’t know what she is going to do. She spends the entire book worrying about how no matter what, someone is going to get hurt and be disappointed in her. I mean she doesn’t even spend any real time trying to figure out what she wants, she just stresses that she needs to figure out what she wants. No one really knows what is going on except for Robin’s best friend Annie Whitman, and Jessica Wakefield who Robin blabbed it to (I still can’t decide if it was on purpose or if Robin just had a moment of weakness). Jessica being Jessica, can’t keep a secret and tells Elizabeth, but that seems to be it, so I am also kind of proud of Jess. Elizabeth doesn’t know it is so hush hush and when she sees Robin’s boyfriend, George Warren, she mentions how wonderful it is that Robin was accepted at Sarah Lawrence. George gets pissed and Elizabeth realizes she made a mistake, but gets sidetracked from apologizing to Robin for it right away.

Meanwhile Jessica and Elizabeth each had their own storyline in this book, both connected yet different, and both in the background. Jessica takes up a babysitting job because she never has enough money to buy everything she wants. The child she is watching is an adorable 5-year-old named Allison and this is the kind of child people read about, and suddenly end up wanting one. Allison is sweet, funny, innocent, good natured and mild-mannered who is 100% obedient all the time and so thoughtful she never has to be told what to do. For any parents out there, how many children do you know who are like this 24/7? Yeah, I thought so.

Jessica is babysitting Allison because her parents are always traveling and her older brother is a senior music student at Sweet Valley College, who is working on composing a symphony for his thesis. Allison’s brother Alex is a total hunk and Jessica is madly in love and determined to get him to notice her. But Alex only has eyes for music, so Jessica decides to learn how to play the recorder because Allison is fantastic at playing hers and she is only five after all – how hard could it be? (Famous last words Jess, famous last words…)

Jessica is terrible at the recorder. She is too impatient to really learn it, and Alex doesn’t seem to be motivation enough to put in hours of practice. Jessica at one point even thinks it might be broken, because she can’t possibly be that bad and asks Elizabeth what she thinks. Elizabeth tries it out and instead of a shrill broken note, plays it beautifully. And this brings us to Lizzie’s storyline.

Elizabeth falls in love with playing the recorder. I mean seriously, you could substitute ‘the recorder’ with a man’s name whenever it is brought up in the book and it would make more sense. Elizabeth feels terrible because in the past Jessica has started something and Elizabeth would also take it up and then outshine Jessica. Elizabeth is determined to have nothing to do with the recorder because she doesn’t want to hurt Jessica’s feelings or make her feel insecure. Even though, Elizabeth swears she will stay away, she keeps sneaking time alone with it, in Jessica’s room while she is away, making beautiful music in secret… see, I told you it made more sense if it were about a man.

Elizabeth feels incredibly guilty and says she “just can’t” take playing the recorder away from Jessica, or talk to her about it. This is seriously the most idiotic Sweet Valley High storyline to date. I am not even kidding. The recorder isn’t doing Jessica any good, however, and she only seems to irritate Alex by constantly pestering him when he is supposed to be composing his symphony. Jess realizes the recorder will never work (because she seriously stinks at it) and decides to go with her last resort scheme to land Alex: faint in front of him. Of course, it is not real, and reeks of desperation, but what really gets me – it seems to have worked!

Alex rushes to Jessica and suddenly sees the light that is all of Jessica’s fabulousness and asks her to wait for him, because he only has time for his music until he leaves for Julliard, where he will spent the next two years. But after that… (I am shaking my head so hard right now) he asks her to wait for him. But Jessica is not the type to be tied down and refuses to even consider the distance thing, so that’s that. Jessica bails immediately and doesn’t even bat an eyelash at the fact that she and Alex aren’t going to be anything. World record rebound alert! On the plus side, Elizabeth now has Jessica’s blessing to play the recorder and make as much sweet music as she wants.

Back to Robin… Robin is constantly grumpy and off her game at everything because of the stress of having her entire college education paid for (I’m sorry, was I supposed to be more sympathetic?) and gets into it with her mom. Her mom accuses Robin of being selfish for wanting to consider her options because her Aunt Fiona is giving them a much needed kitchen renovation because she is so thrilled that Robin is going to Sarah Lawrence. Um, I think Mrs. Wilson needs a refresher course on being selfish. Robin’s boyfriend, George, is being just as bad and constantly says “our plans” and I really wish she would say something to him, yesterday.

Things only escalate when Robin’s aunt actually blows into town. I think the ghostwriters are really trying to send a message about self-made women. That is how Aunt Fiona is described and yet she is an utter wretch it seems. She treats everyone as if they are her literal servant and/or commoners whose lives she was meant to control because she is so superior. Nice to know what a portrait of self-made woman looks like (gag)…

Robin is so off that it is affecting her diving, but the championship is less than a week away. Then right before the competition, Robin’s aunt takes her and her family to an incredibly expensive restaurant (the aunt refers to it as cozy) and Robin finally finds her nerve and tells her aunt she hasn’t made up her mind yet. The aunt freaks out (like majorly) and tells Robin she’ll never see another dime from her and all of these other things, so Robin shouts that she would never take any money from her aunt, even if she was starving, and basically says she is a maniacal dictator (not too far off from how she is written). Robin storms out of the restaurant and calls George from a payphone to pick her up. When Robin tells George what happened, George rants about Robin’s family and “how dare they” while talking as if he knows exactly what Robin wants (“our plans” comes up again) even though he hasn’t once asked her. But the boy is clueless.

At the diving competition, it is a showdown between Robin and her rival, Tracy. Tracy isn’t given much page time, but she seems smug in a way that makes me instantly dislike her. Go get her, Robin! Robin still can’t get it together and right before the start of the competition George disappears so inwardly Robin gives up (I am so tired of the man-dependence of the female characters in all of these books). She is still diving, but doesn’t care and has checked out. But after her first terrible dive, George reappears with Robin’s aunt, mother and brothers.

George finally found that clue he was missing (with the help of Elizabeth Wakefield of course) and realized that Robin was making herself miserable because she felt stuck in the middle, between her family and George. Because George was behaving just as badly. As far as gestures and making things right go – this isn’t half bad. (Funny tidbit, Tracy is Robin’s next door neighbor too, and George convinced Aunt Fiona to go to the diving competition because it was Robin versus Tracy. Why would Aunt Fiona care that Robin was facing off with Tracy? Well because since she first arrived she has not been able to get over the tacky statue in Tracy’s front yard. Yep, a tacky statue… I am not even kidding.)

Robin kicks Tracy’s butt, even though she flopped at first because she is just so amazing when she is in top form. Robin’s family congratulates her and her aunt admits she was wrong and apologizes, and then tells Robin she is very impressed with the whole diving thing (she totally bashed it earlier) and will support Robin going to any school she chooses, whenever she is ready. (Sheesh, where was Aunt Fiona when I went to school?) George apologizes to Robin, Robin apologizes to Annie. Everyone who needs an apology gets one and everything is wonderful again.

I seriously could have used an aunt like Robin’s when I was going to school, and I still have the student loans to prove it! 🙂

The only other thing I have to say is about the cover of this book. I mean Sweet Valley High covers are always both bad and ridiculous, but this cover I couldn’t not say nothing about it. Look at George on the cover – he looks hella old and he is only supposed to be two years older than Robin (so about 19). From the cover it looks like she is in a fight with her father. I’m sorry, but this takes the cake of terrible covers so far, and I find George’s likeness on it, ugly and creepy. But don’t worry, the next book’s cover is not nearly as bad! 😉